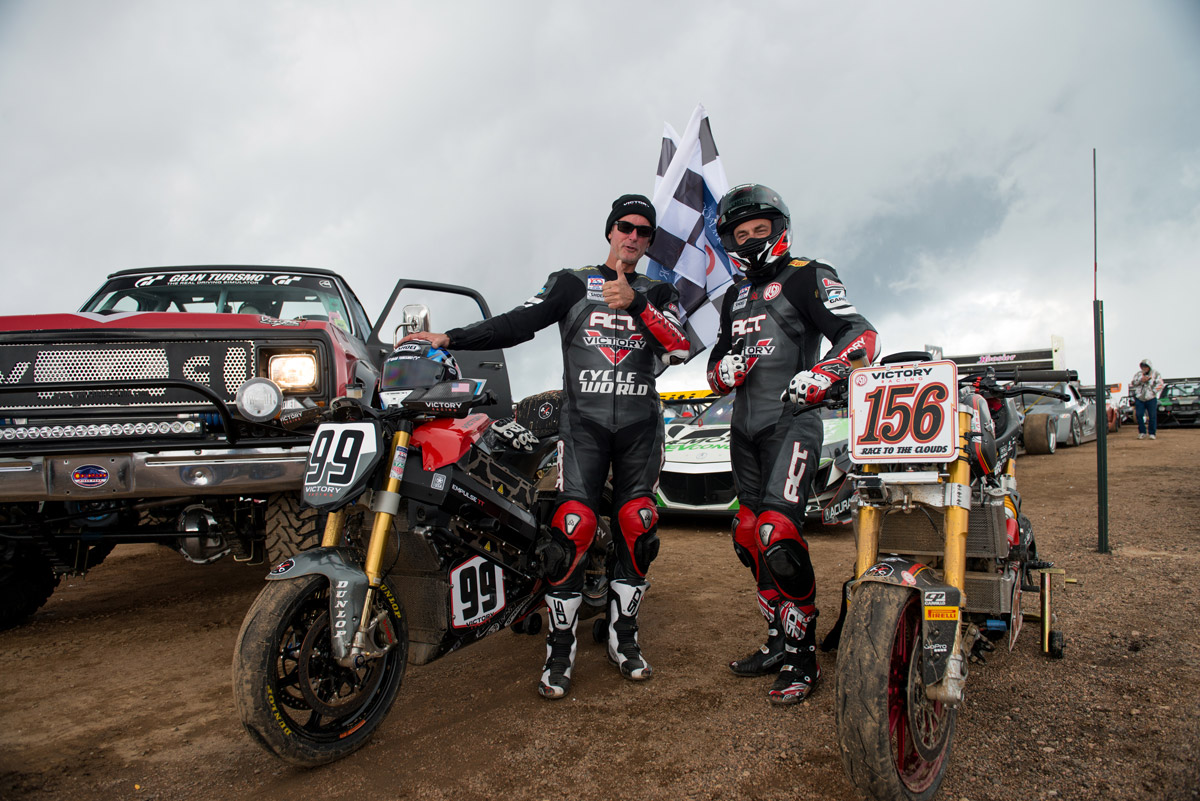 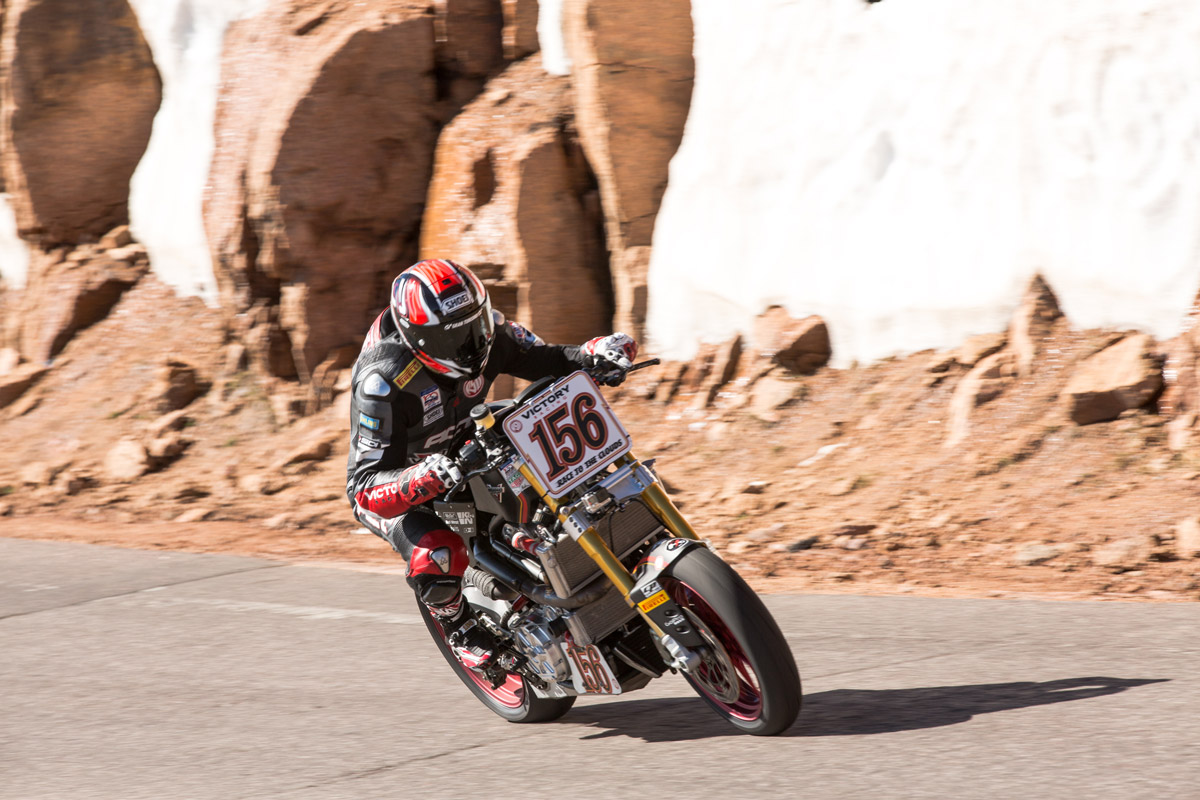 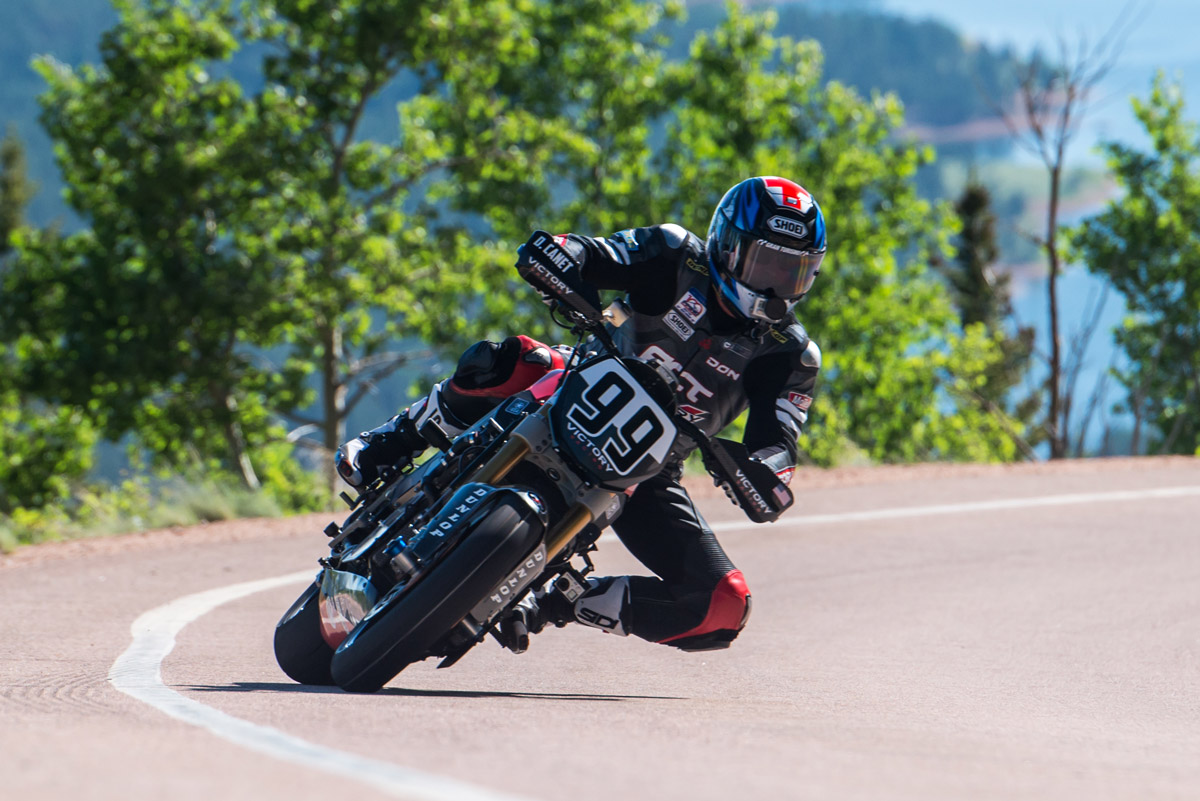 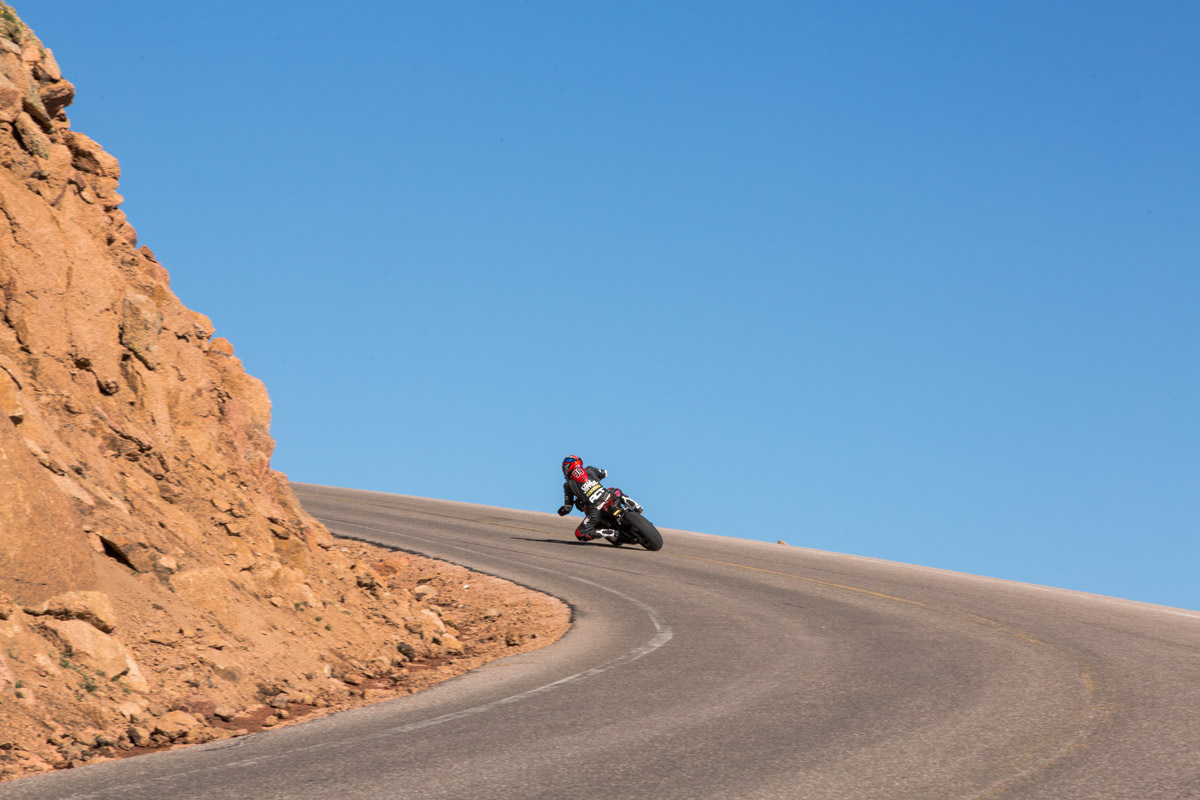 In the overall PPIHC motorcycle competition, Canet and the Empulse RR placed 2nd while Toye and Project 156 placed 3rd, both closely following veteran racer Corsican Bruno Langlois and his Kawasaki Z1000 who benefitted from a dryer and warmer course later in the morning due to a series of red flags.

“The hair-raising moment of my run came in a fast 100-mph sweeper approaching Upper Gravel Pit, which is well up the course. I slithered across an oil stain at the apex, then again crossing over the double yellow centerline. In a heart-stopping moment I ran out of road and was off on the dirt shoulder at high speed. Luck was on my side as I stood the bike upright and coasted along looking for the best spot to cut back onto the stepped pavement edge. The excursion completely killed my drive through the following flat-out right and straight that follows,” Canet says about his winning run on the Empulse RR in the PPC-Electric Motorcycle Class. “My hope for a King of the Mountain top time evaporated, however, as the downtime allowed the road to dry prior to the Heavyweight class contenders making their run, there's almost no way to fully prepare for the track conditions you'll see in the early morning runs.”

Victory Motorcycles was the only manufacturer at this year’s PPIHC to race both electric and gas-powered race vehicles.

“I think it’s a great month for Victory Motorcycles and a great month for America,” says Brian Wismann, Victory Racing Team Manager. “We took on the world’s best at the Isle of Man TT achieving a podium there, then a couple of weeks later taking on the other epic race on the planet here at Pikes Peak and putting two bikes on the podium – one gas and one electric. I’d just like to really thank all of our sponsors in helping us race these bikes to the clouds in such a stellar way. Victory Motorcycles puts out a great team.”

The Victory Empulse RR is a race-prepped version of the Victory Empulse TT and built on the legacy of the motorcycle that took 3rd place in last year’s SES TT Zero Challenge at the Isle of Man TT with rider Lee Johnston. It is a completely different bike than the electric Victory RR that achieved a 2nd place podium finish with William Dunlop at this year’s recent Isle of Man TT.

While the base frame and overall design of the Empulse RR are essentially the same as the production Empulse TT, a more aerodynamic and lighter monocoque carbon-fibre subframe is used and the battery, controller, and Parker Hannifin-sourced motor have been upgraded with repackaged battery cells offering more capacity, new motor windings and an updated control system and wire harness. Visual differences from the version raced last year in the SES TT include an upright riding position, reduction of bodywork and the addition of hand guards.

Project 156 is a custom race bike built in association with Roland Sands Designs to serve as a test bed for a prototype engine that Victory race technicians developed to analyze the limits of the powerplant that now propels the new Victory Octane production motorcycle.

Garnering what was learned from Project 156, the production version of the 1200cc Octane engine was born. Canet placed well in qualifying aboard Project 156 in 2015 but was unable to finish the run only a few miles from the top of the mountain due to a fueling issue. This year, the bike’s engine cooling, lubrication system and fuel system had been massaged to better deal with the dramatic changes in the elevation of the course – particularly at lower RPM to further help Toye squirt out of the tight switchbacks.

“Victory Motorcycles made history at Pikes Peak this past weekend, proving its Modern American Muscle with both electric and gas-powered motorcycles on what’s often referred to as America’s mountain,” says Rod Krois, General Manager of Victory Motorcycles. “The Empulse RR and Project 156 have proven to be important test platforms for Victory engineering and – as their results on the mountain show – are sure to pay dividends in future products.”

“Two years ago we didn’t have anything to compete with at the hill here,” says Nate Secor, Marketing Manager for Victory Motorcycles. “Now, having two of the three spots in the overall, all of our owners and all of the fans of American motorcycling should be proud. As a manufacturer, we’re extremely proud of all of the work the guys have done on the engineering side and with the riders for putting us in this position. It is a long way to come in two years and I don’t think anyone else in the world has a podium at the Isle of Man TT and at Pikes Peak in the same month. So we’re extremely proud of that and will be excited to get back here and make it happen again.”

ABOUT THE BROADMOOR PPIHC

Founded in 1916 by Spencer Penrose (also the founder of The Broadmoor Hotel, Pikes Peak Highway and El Pomar Foundation), The Broadmoor PPIHC takes place on a 12.42-mile public toll-road boasting 156 turns, while competitors climb 4,720 ft. from the 9,390 ft. Start Line at Mile 7 marker on the Pikes Peak Highway to the 14,115 ft. Finish Line at the mountain’s summit. The Broadmoor Pikes Peak International Hill Climb Brought to you by Gran Turismo is the second oldest motor sports race in America and a long-standing tradition in Colorado Springs and the Pikes Peak Region. First competed in 1916 and this year marks the 100th Anniversary & 94th Running of the “Race to the Clouds.” The current record is 08:13.878 and was set by Sebastien Loeb in 2013. There is no other racecourse in the world like The Broadmoor Pikes Peak International Hill Climb. That is why it attracts race crews that are willing to spend several hundred thousand dollars and months of preparation to compete for the right to be the King of the Mountain. The race is self-sanctioned and is the most diverse one-day motorsports event in the world with everything from Sidecars, Motorcycles, Semi-Trucks, and 1,400+hp EV & Unlimited Racers being able to compete in the same event. To purchase tickets and learn other information on the PPIHC, visit www.ppihc.com