Victory Motorcycles is proud to announce that the Swiss endurance rider Urs “Grizzly” Pedraita has achieved a new world record by circumnavigating five continents in 119 days and 21 hours aboard his Victory Cross Country Tour.

The 119 day and 21 hour time INCLUDES the time that his Victory Cross Country was flown/shipped between continents – unlike other records that don’t include the transfer time.

He ended his adventure on Sunday 10th July at a celebration held in his honour at Volusia Motorsports in New Smyrna Beach, Florida. 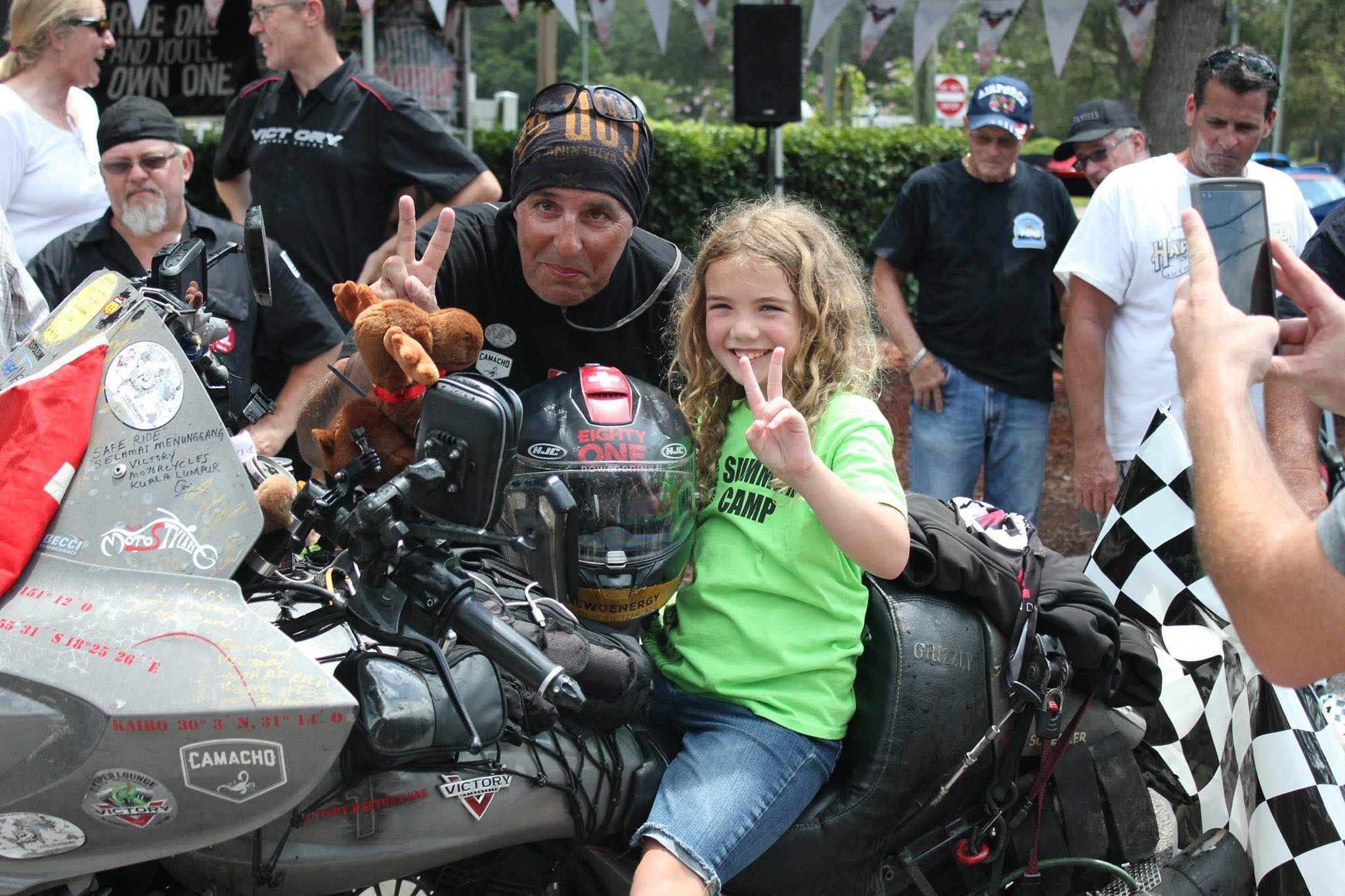 At the end of the trip Grizzly exclaimed: “With this journey the spirit of the pioneers of the past has been re-established.”

“There is no place for time-stops in this kind of adventure,” he said referring to not stopping the clock for the transfer flights. “This victory belongs to the team and is dedicated to my brother and my guardian angel, Emelie from Peru.”

The previous ‘riding time’ record was 120 days and 2 hours so Grizzly has beaten this time by a staggering 47 days and 13 hours.

However, Grizzly wants his “all-continents via their longest axis” record to be listed as 119 days and 21 hours including all transfer times.

Grizzly began his adventure at the Daytona International Speedway on 11th March 2016 flanked by hundreds of owners of Victory motorcycles who joined him to ride one lap of the Daytona 200 road course and escort him out of town for the first part of his journey. 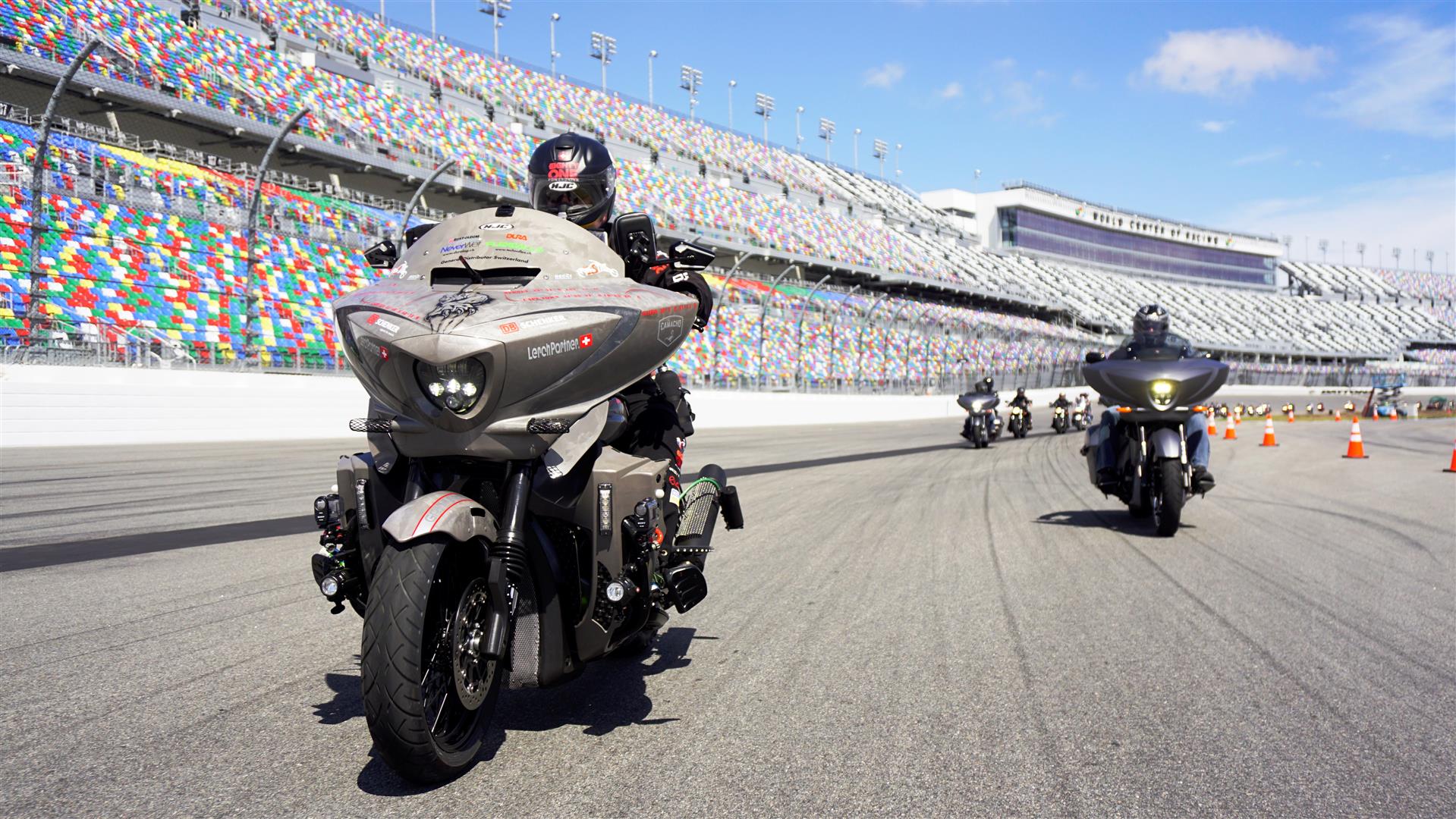 From Daytona Beach he traveled 3,971 miles in six days and 14 hours to complete the first stage of the ride to Panama City, Panama. He then continued traveling south 6,269 miles for nine days and 23 hours to reach Ushuaia, Argentina at the tip of South America. 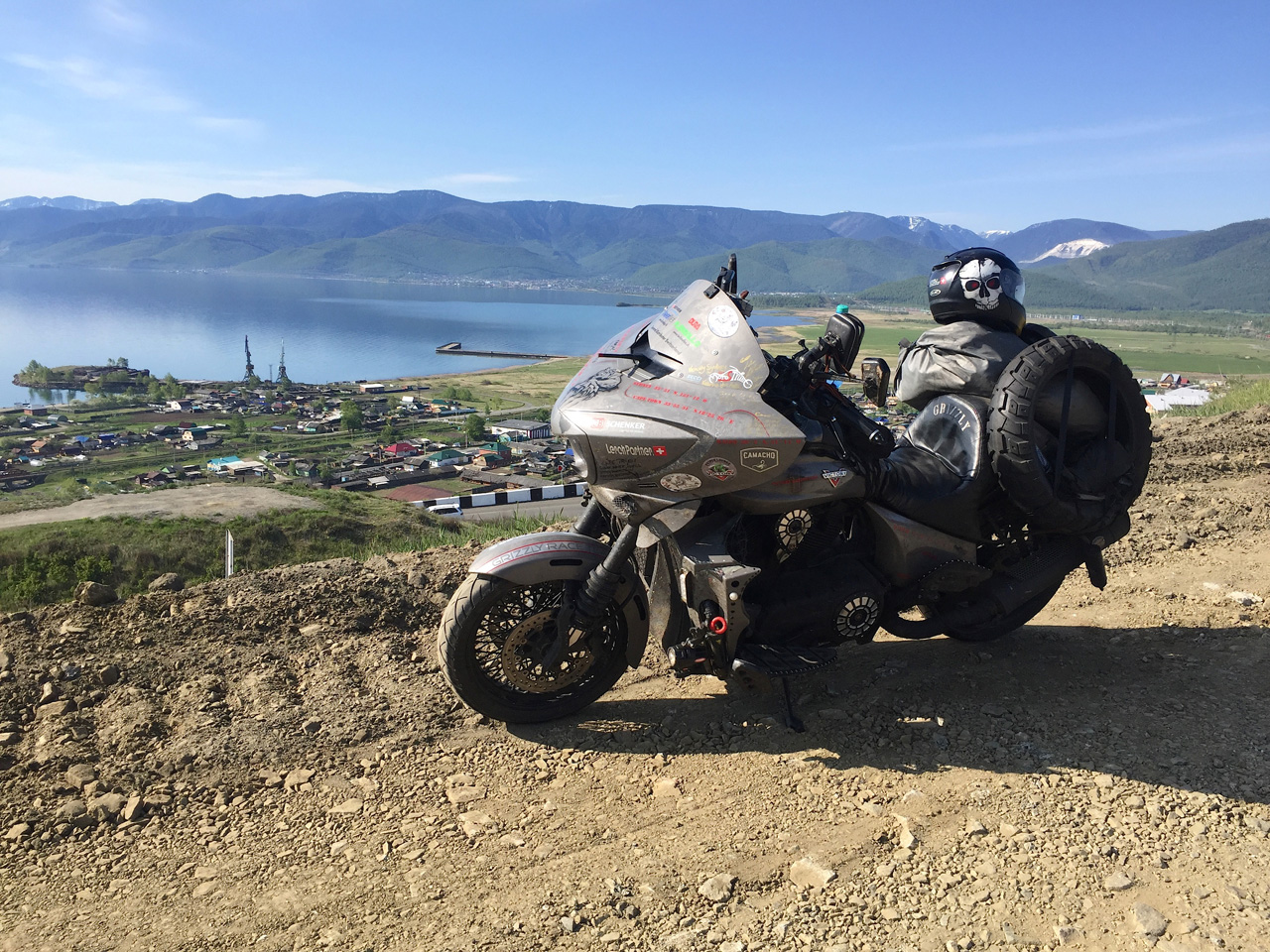 From there, he returned 2,088 miles to Santiago, Chile, loaded his bike onto a plane and flew to Australia, where he spent six days and five hours riding 4,604 miles west across the continent from Sydney to Perth. 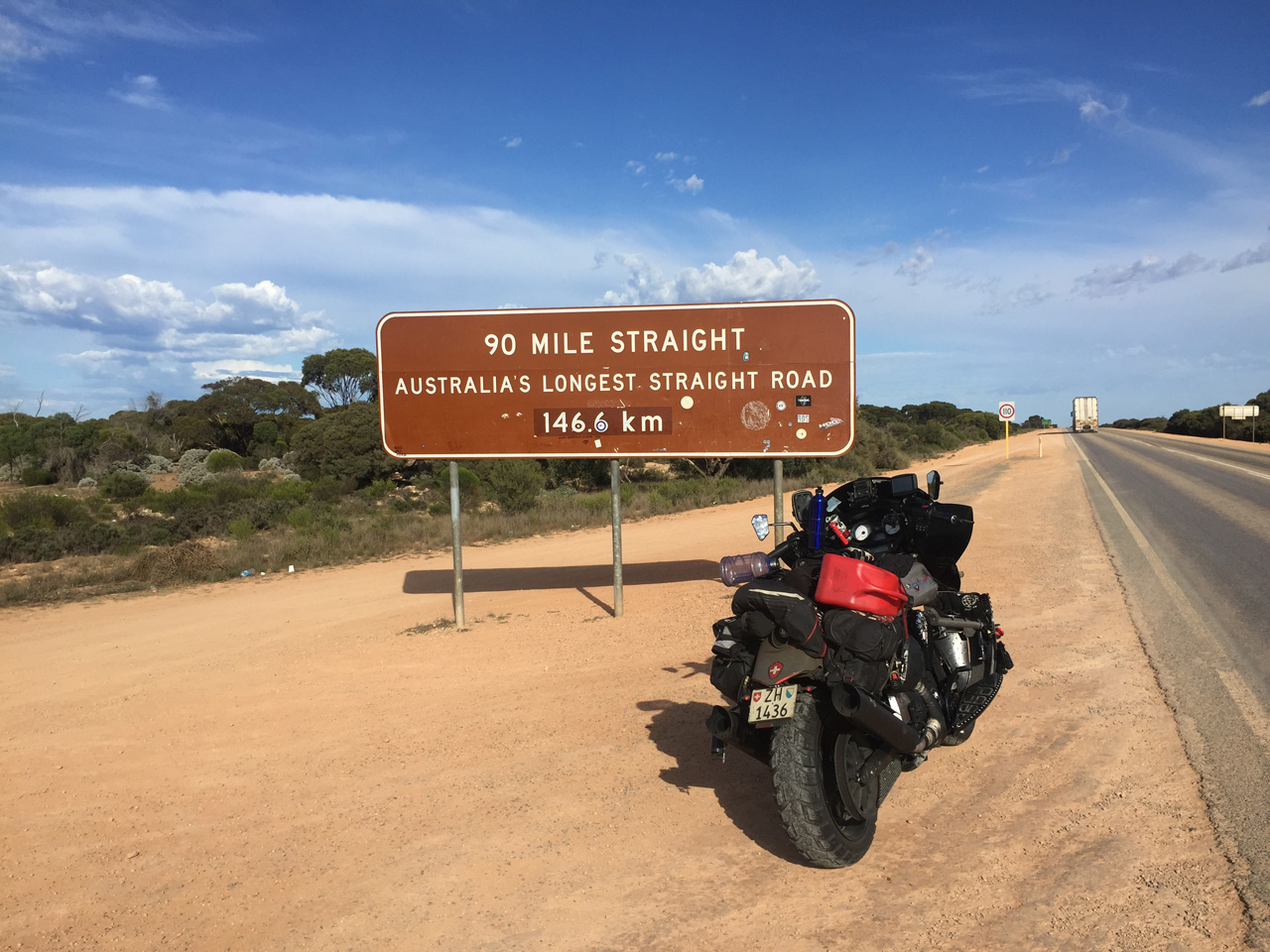 In Australia on the country’s longest straight road

From Perth, Grizzly and his Victory flew to Cape Town, South Africa and awaited clearance through customs. Thereafter, he took 13 days and 23 hours for a 7,509-mile journey north from Cape Town to Cairo, Egypt completing the African continent. 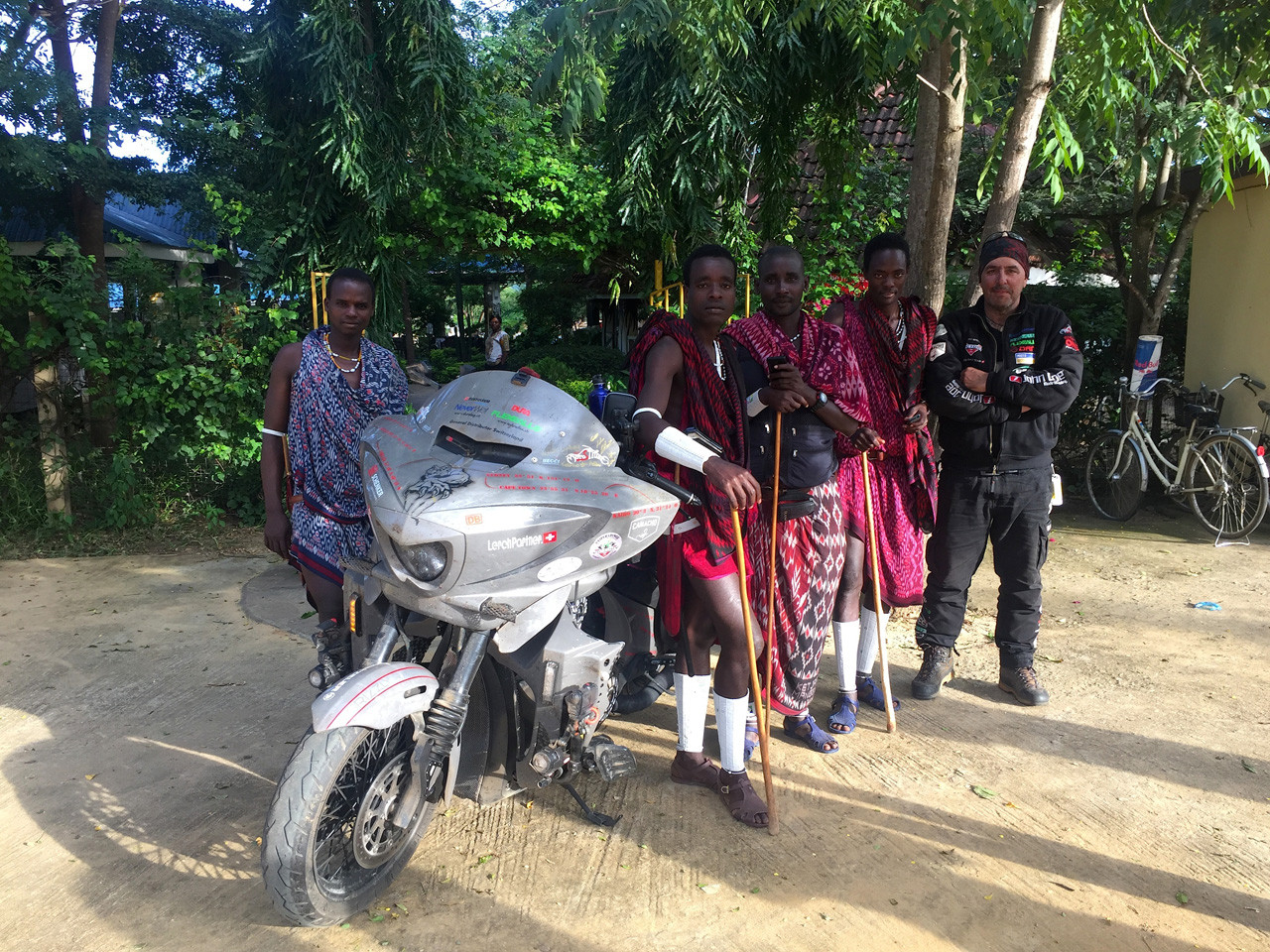 A ferry then took him across the Mediterranean to Tarragona, Spain. From there, he rode 5,447 miles in six days and 23 hours from northern Spain to Gibraltar to North Cape (Nordkapp) Norway.

Grizzly then turned east, riding through St. Petersburg, Moscow, Irkutsk and Vladivostok during an 11-day-7-hour, 7,280-mile journey across Russia, a 4-hour and 249-mile tour through South Korea, and a 5-day-11-hour and 2,989-mile ride through Thailand and Malaysia. 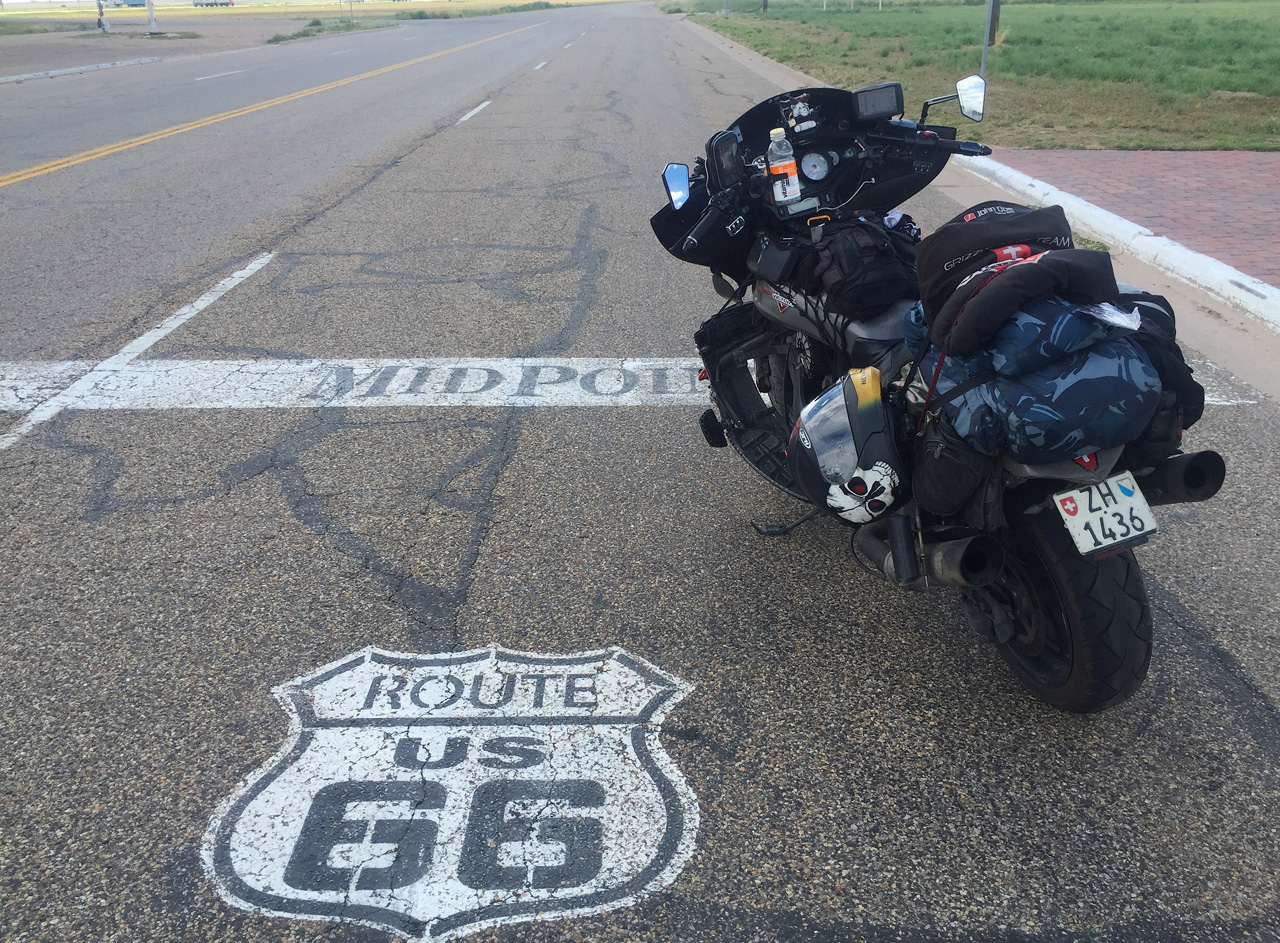 From Kuala Lumpur, Malaysia, Grizzly loaded his bike onto a plane and traveled to Anchorage, AK, before resuming his 6894-mile tour across North America through Edmonton, Winnipeg, Toronto, Chicago and Santa Monica, Calif. to his finish in Daytona Beach.

Motostyling Zurich modified the Victory Cross Country Tour used for this attempt. While the engine, frame and running gear remained untouched, other parts of the bike were redesigned to suit Grizzly’s needs as he covered long distances in remote parts of the world.

“This record is a testament to the durability, capability and dependability of our Cross Country Touring platform,” says Nate Secor, Marketing Manager for Victory Motorcycles. “Victory Touring owners love to roll back the miles. If you asked them, they’d likely say there’s a little bit of Grizzly in each of them when they’re covering ground during their own journeys.”

Time and position measurement for Grizzly’s record-setting ride were done via GPS and satellite tracking. The timing was not stopped when waiting to pass a country border or when the rider was sleeping.

By comparison, Grizzly rode about double the mileage of those record breakers covering around 76,000km compared to 32,000km.

The time that Grizzly’s Victory Cross Country spent in transit between continents was 47 days and 8 hours.